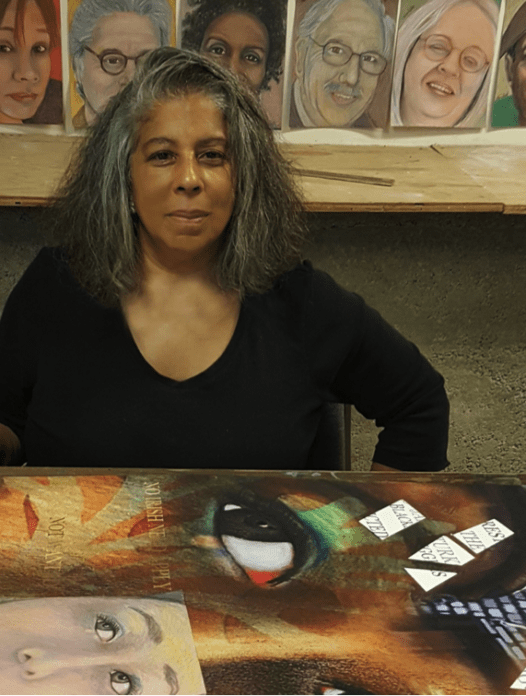 “This world does not move without Black creativity.” — Melissa Kimble

Who is Robin Holder?

At nine years old I earnestly explained to my friends that I needed a store bought jump rope with wooden handles because the clothesline typically used for Double Dutch reminded me of lynchings.

As a biracial, multiethnic, American youngster in an activist African-Russian-Jewish-Caribbean family I developed a formidable interior dialogue that reflected my diverse heritage. While growing up in New York City I studied, explored and played in a community of widely varied backgrounds. I was exposed to a world of both complicated racial, class and ethnic conflicts and integrated harmony. I was intrigued by the cultural differences between my classmates, friends and neighbors and simultaneously aware of the danger of identity ignorance.

“Five Spot by 5 is a stencil monoprint. It is a celebration of African American jazz. I wanted to convey the energy, rhythm, collaboration of our jazz musicians.  This piece is like a jigsaw puzzle. Each shape in the image is necessary to complete the visual statement. There are about 60 individually inked and printed shapes that I cut out my shapes from transparent acetate.”

“They Damaged Us More Than Katrina is a serigraph incorporating 16 screens. This was the 2006 Atlanta Black Arts Festival Collector’s Guild Print and speaks to the empowered resilience we folks of color have that encourages us to thrive in spite of historic institutional brutalization.”

My visual language is rooted in layering, painting, printmaking, digital image manipulation, and drawing. I usually initiate a collection of works with a specific theme. I use a distinct combination of techniques for each series. At times I include a material, technique or procedure that I am not familiar with. This enables me to stretch beyond the known and discover new approaches. I develop my imagery by considering a series of questions that explore the idea. Some of my work requires extensive research. From time to time I’ll reference direct personal or societal events. There is an aspect of storytelling in my practice. I am most curious about the expansive and myriad manifestations of our human experience. Although singularly personal, I hope that my work reflects universal truths.

My mother cautioned me that being an African American Jewish female is automatic grounds for marginalization in the United States of America. I decided that the role of victim was unacceptable. While studying at the High School of Music and Art I realized I could be creative instead of reactive. I decided art making could be my constructive vehicle of experimentation, exploration, communication and courage! While living abroad I extended my perspective into a global point of view.

“Robin Holder was selected for the exhibition IN WHAT WE SEE: A Printmaker’s Response because her work incites contemplative thought and conversation. Her process of layering and dynamic color using monoprinting subdues viewers and creates an environment of learning and growing.” – Harris Wiltsher

Irish Need Not Apply, No Negroes, No Dogs is part of a series title USA: United States Of Anxiety Series

This series began in 2017. Each piece consists of drawing, digital imaging, large format printing and painting.

2021 LaGrange Art Museum, LaGrange, GA, Who Are We? , Curated by Lauren Oliver

2020   Kentler International Drawing Space, Brooklyn, NY, Access and Inequities. I Hear You. Do You See Me?

2017 United States of Anxiety, Center for the Digital Arts of Westchester New York

YMCA of the USA, New York City. Edition of prints for The Imperative One Awards.

The New York Foundation for the Arts. A filmed public service announcement produced for television

1993  New York Foundation for the Arts, Teaching Residency at P.S. 1

2019  Co Curator of Disillusionment A curated series of interviews and exhibition of 25  women artists responding to the theme by referencing being wrapped, covered, clothed, dressed in disillusionment

2018  Interviewer:  Kentler Connects Collectors: How To Be a Voice in culture today Panelists: Perian Carson and Wes Cochran of The Cochran Collection, Georgia

2016  Art Action Academy at the Queens Museum. Sponsored by Center for Artistic Activism and NEA

2012  Movement in Color, Exhibition 1 East 53 Street Gallery, NYC, Sponsored by the Studio In A School Association

2001  Mid Atlantic Arts Foundation: Artist As Catalyst. Collaborative Residency with Art Sanctuary, Grands As Parents and Church of the Advocate

2021 I Am A Man by robin holder, The Nation.Com: OppArt Artistic Dispatches From the Frontlines of Resistance

2020 For and About the People: robin holder. Essay by Dr. Halima Taha. Published by Kentler International Drawing Space and Black Art in America

2018 Brooklyn On My Mind: Black Visual Artist From the WPA to the Present, by Myrah Brown Green, Schiffer Publishing

2012 In the Eye of the Muses: Selections from the Clark Atlanta University Art Collection by Jerry Cullum, Tina Dunkley Cynthia Oliver-Ham

2006 Sandra Bloodworth and William Ayres, The Monacelli Press, Along The Way: MTA Arts For Transit

1993 Henkes, Robert, The Art of Black American Women: Works of Twenty-Four Artists of the Twentieth Century, Published by McFarland & Company

2018   By and About Women, Harvey B. Gantt Center, Charlotte, NC. Curated by Dr. Michael Harris

2004  Gettysburg College, PA. Art of the African Diaspora in the Age of Globalization

1996  Pittsburgh Center for the Arts, Pittsburgh, PA, Of The Spirit, Curator: Joyce Scott