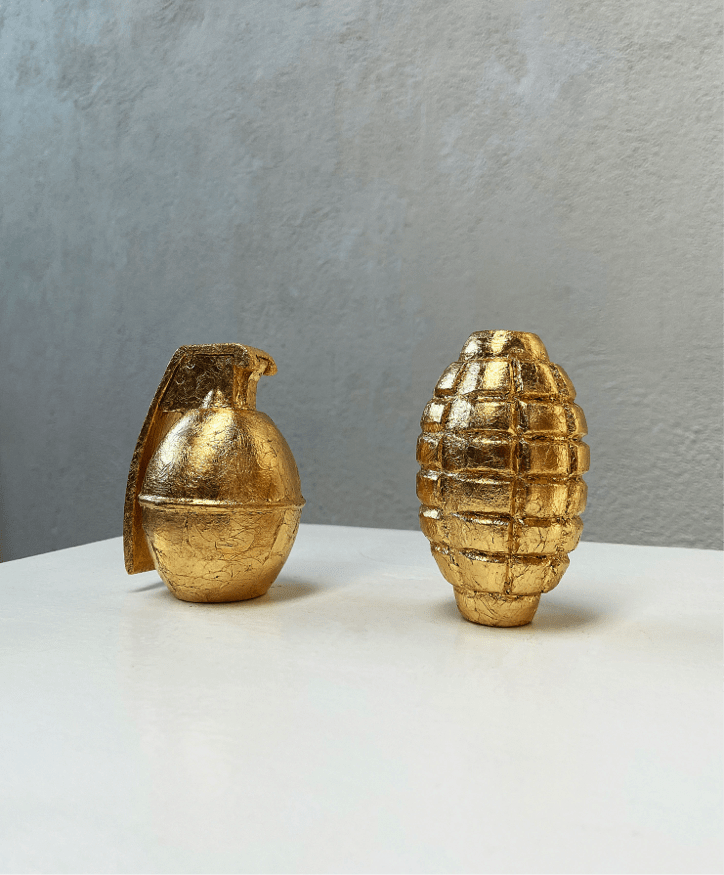 Marco La Rosa: If It is not fine, It is not the end

From this title, a tribute to John Lennon, Marco La Rosa tells us through his artistic language the experience lived during these months of lockdown. The works chosen for this Artist Talks, in fact, are part of the Quarantine project, created to make known, to all art lovers and not, how the artists have lived and are still experiencing this historical moment, that involves us all, indiscriminately.

The artist, originally from Brescia, experienced the most difficult part of the Covid-19 pandemic in Italy, precisely based on the geographical location of his city. Lombardy, in fact, was one of the most affected regions during the virus outbreak. Marco La Rosa’s artistic research, from the very beginning, has always been directed towards an extremely conceptual language where the Platonic philosophical doctrine appears in different forms. He concentrates on a notional dissection that is shaped in a continuous limit between matter and emptiness; for Marco, matter is a calculation tool for space-time dimensions.

In fact, sometime before, Sol Le Witt and Robert Morris faced the harsh and dominant dualism between the static nature of work and the temporal stratification that weighs on it; and how some critics have gone so far as to solve the riddle by thinking of the material as a direct vehicle of meaning. In La Rosa’s work we also see some anachronistic elements which, although far from a complex figurative representation, equally exercise the constant resonance of the sublime names, that stiffen the legs of contemporaries.

For the artist, in fact, the search for a fulfillment that places the artist at the center of the universe is incessant, a sort of return to Renaissance anthropocentrism (even here we speak anachronistically) that dissolves in the moment immediately following creation. . At this point, we can cite a part of the essay “Eros and Civilization” by Herbert Marcuse who stated:” Art represents a challenge to the principle of current reality: representing the order of sensuality, it invokes a repressed logic, the logic of satisfaction versus that of repression ”.

Today, in his research, Marco La Rosa proposes a continuous dichotomy between the essence of fullness and emptiness, characteristics apparently common only to objects but which are actually part of the human condition. The passage of time is also a concept that is found throughout the exhibition, materials such as cement and lead are proof of this. Drying, oxidation are processes that occur through waiting.

The waiting that has been and still is an essential part of our days, of our life. Waiting to receive good news from the media and waiting for the right moment to leave that safe place that is our home – that’s why Marco uses the shell of a snail in “Snail” to emphasize that: if it doesn’t go well, it is not the end – because in the end what remains in us is hope and because the expectation is totally pregnant with it. In all of Marco’s work, therefore, we can see an incessant and syncopated search for hope through that lifeline that we call art. 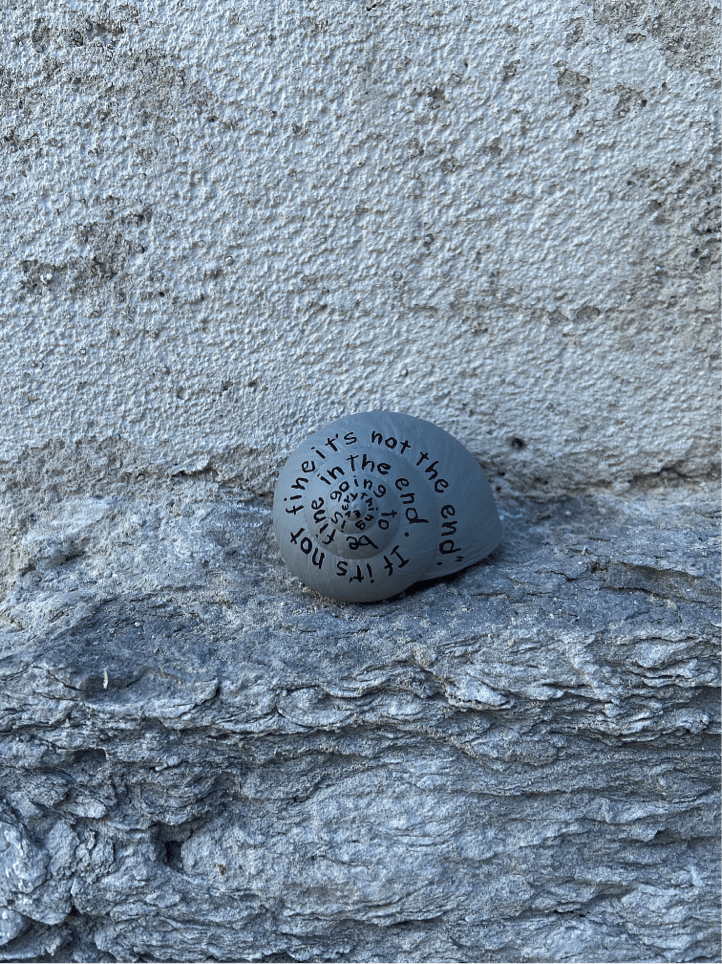 I chose to intervene on the snail’s shell for the charm of it’s spiral shape. Particular figure that can be developed indefinitely. The snail carries with it the concept of home, of living and inhabiting a certain space at the same time. The sentence written on the shell is a tribute to J. Lennon, given the particular and complex historical moment we are experiencing, I thought it important to linger on the concepts of “end” and “everything will be fine” (also understood in their opposite meaning). 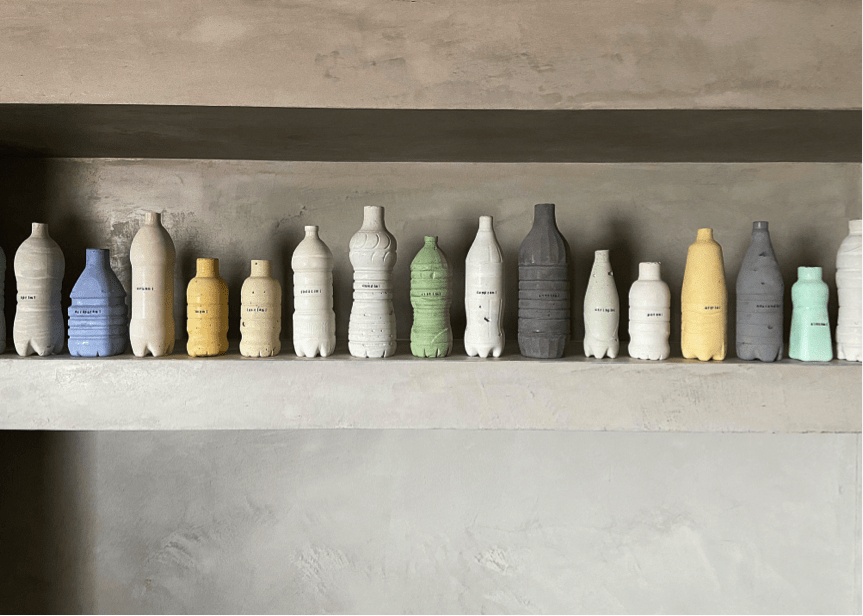 Title: “The city of laughter”

Work designed and developed in order to represent the void during the quarantine period. Emptiness intended both in a physical and mental sense. I filled the bottles and containers used in this particular historical moment with cement and color pigments.

The sentences reported, through ink stamps on the concrete, are linked both to what I felt at that particular moment, and to a hypothetical three-way dialogue: the void, the virus and myself. 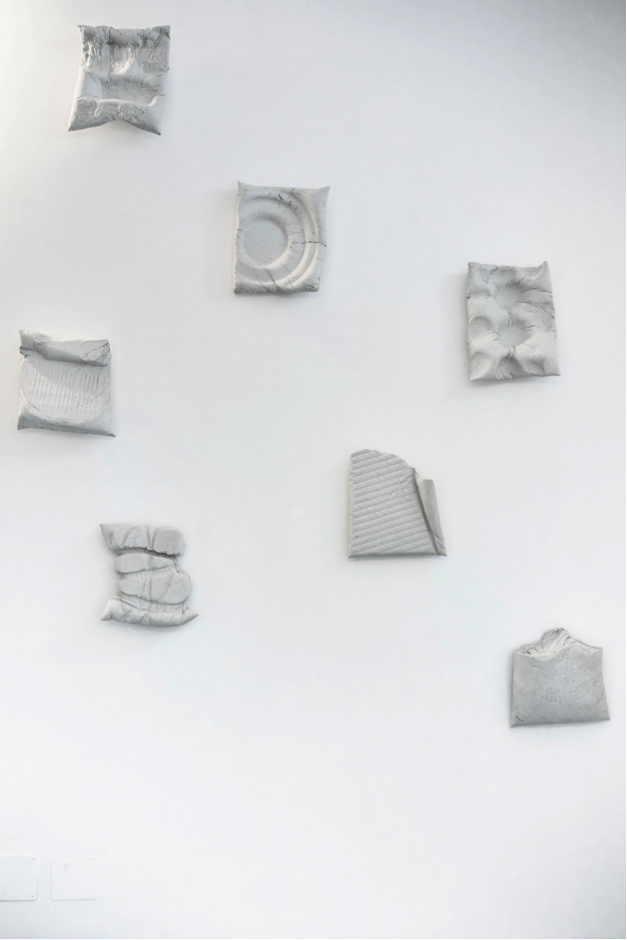 With this work I tried to transform the idea of ​​vice, according to Dante’s imagery of Hell into the Divine Comedy, into a sculptural form. In a journey into the deep human nature, the seven deadly sins (Sloth – Avarice – Throat – Envy – Wrath – Lust – Pride) represent moral and behavioral inclinations. The sculptures are concrete “bodies” subjected to external forces that irremediably change their shape. Various factors come into play such as gravity, weight, crushing, pressure, contraction, deformation, external agents that imprint an extreme and definitive sign or conditioning at the very moment of creation. The seven works make otherwise invisible “forces” visible, with the idea of ​​best representing what a particular body (or rather, a soul) can feel for eternity. 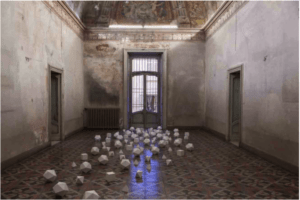 Ecce Homo is a sculpture scattered with one hundred pieces, one hundred Platonic solids that represent, according to the Greek philosopher, the four elements of the world (earth – water – fire – air) which, broken down individually, mirror the shattering of man. The number of solid-fragments was elaborated by me according to the percentages of the chemical and physical substances that biologically make up an average human body, then recalculated and combined with those of the same elements present on earth. In this sense, the installation is the image of man himself, “disassembled” in its main elements. These geometric figures are oriented according to a centripetal line of force that attracts them towards a precise and unequivocal point. They are directed and oriented towards an Omega, that last letter of the Greek alphabet which traditionally represents the end, death. _ 23 tetrahedra (fire) _ 18 cubes (earth) _ 29 octahedra (air) _ 30 icosahedra (water) 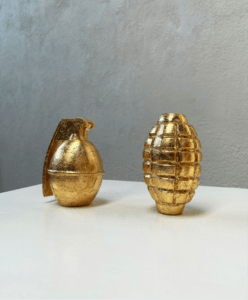 Title: They could have continued forever

I thought and made this work during the lockdown period. These are two resin sculptures covered with gold leaf representing two hand grenades. The idea of ​​”enhancing” and “embellishing” a dangerous, and at the same time highly destructive element, is a bit of a short circuit, a sort of provocation. Then placing the two sculptures one in part to the other binds them in an indissoluble way to their destiny as a couple, a metaphor for life and its relationships (of love? Of friendship? Etc … etc …). Finally, the title makes the relationship even more “ambiguous”: “Could they have continued forever” the relationship itself? To be potentially explosive? To be constantly in the balance between the good and the bad? Sign or destiny that no relationship is eternal? 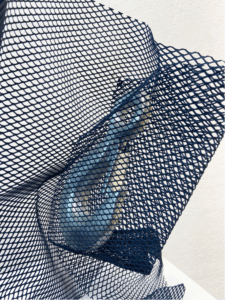 Title: It is wonderful to delude yourself

“It’s wonderful to delude yourself” is a sculpture created during the lockdown period. The work consists of two parts that form, in the end, only one: a steel hook inside and a painted metal mesh on the outside. The net wraps, entangles, blocks, traps, … the hook, making the hook itself practically unusable. The net prevents the hook from carrying out the function for which it was designed and created, making it, inevitably, unusable, without any apparent meaning.