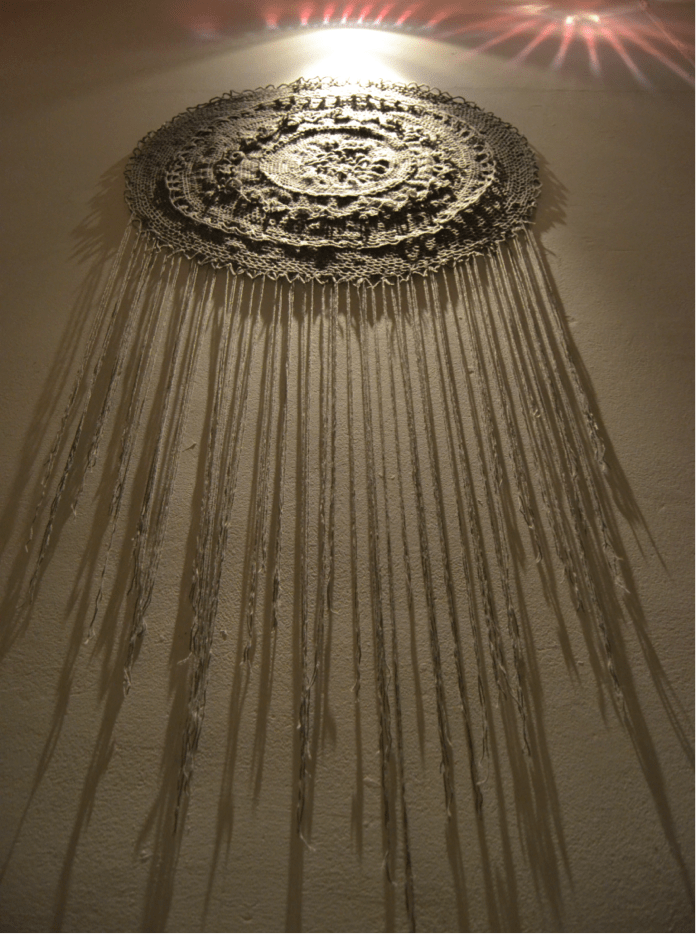 Grazia Inserillo: Little World on Me

Grazia Inserillo Little World on Me

Exhibition related with the Quarantine Project

Little world on me

This title perfectly introduces the concept of the artist as a demiurge, or the one who, according to the Platonic myth, orders and shapes giving a soul to matter. Matter that for the artist becomes the engine of his path and, in a certain sense, a source of salvation. This survival instinct can be traced, in fact, in the text taken from Plinio The Naturalis Historia, where it tells about a love story that survives thanks to the vivid, constant tactile and visual memory:

“… the potter Butade Sicionio was the first to discover the art of modeling portraits in clay; this took place in Corinto and he owed his invention to his daughter, who was in love with a young man.

Since he had to leave for abroad, she traced with a line the shadow of his face projected on the wall by the light of a lantern; on those lines the father imprinted the clay by reproducing the face; having dried it with the rest of his pottery, he put it to bake in the oven ”.

From this story we understand the survival instinct, which keeps madness at bay, a possible cause of loss, dictated by love and memory and which finds life thanks to the artistic process. In fact, all of Grazia Inserillo’s work is built according to these elements that become the foundations of her entire career as a Fiber Artist.

All the work of the Sicilian artist, born and raised between fishing nets and the matriarchal textile tradition, is expressed in creations where with the act of weaving she transfers all the strength of expectation and hope. As in Plinio’s text, Grazia traces, with the thread, the silhouettes of memories contaminated by contemporary life in new forms conceived, however, by an infinite rituality of the gesture. Wool, tulle, nylon and cotton are recurring materials in her works and all recovered from objects that belonged to the family. For the artist, the relationship between the past and the contemporary is fundamental and therefore all her works are intended to bring with them stories that are told in a present time, to keep memory alive as a trace of the future. Grazia Inserillo, therefore, carries her little world upon herself, created in the same way as a demiurge, shaping and animating that cosmos of bonds, threads and fabrics that keep all the love that she has. 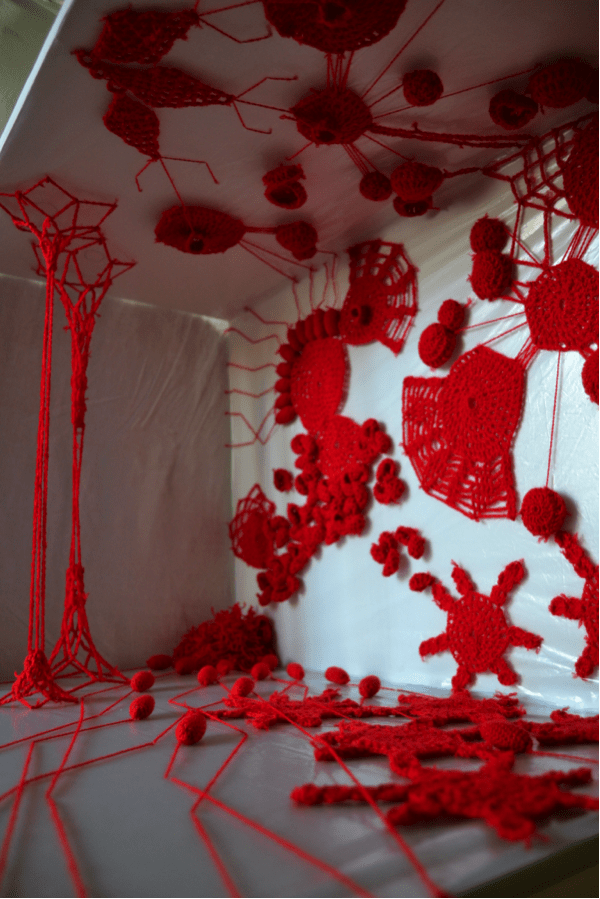 1:10 scale project of a room created for the Polytechnic of Valencia as part of the “Arte y Enfermidades” project in which the theme of Hepatitis C is proposed. I use space to represent a hypothetical infection on a macroscopic scale : the viewer finds himself as if inside an organism that is assaulted by numerous viruses and bacteria which, like enormous cocoons, multiply invading the space and whose filamentous burrs settle everywhere, trying to occupy all the gaps not yet contaminated. The macroscopic vision of a contamination of soft forms tinged with a bright red, recall the bowels of the human body: corpuscles that dart and proliferate under our feet and that go to fertilize, infect and infect the floor, walls and roof of the room white and virgin. The genesis of an unstoppable infection that will continue to expand into space.

Inspired by the story of Giuseppe Pitre, “Peppi lost in the world”, in which the need to move away from his own place to look for work is evident, the still current issues of Emigration, Identity through the importance of one’s roots, and of Fate. The latter is determined by the “pact with the Sun” that every man makes with himself and with his own destiny.

Triptych inspired by the story of the Palermo anthropologist Giuseppe Pitre “Peppi lost in the world”, in which images illustrating the salient points of this story are staged, like small theaters. By updating the issues of emigration; the importance of history which, in the form of roots, nourish the new fruits; finally, the scene of the “pact with the sun”, which represents dialogue as a symbol of balance.

Heteroropia (“heterotopos” means place / other space) is a dimension “other” than the real one that materializes in this tapestry, becoming a real portal, like a sensitive and palpable threshold within which the viewer can take refuge, get lost or happen inside by chance. 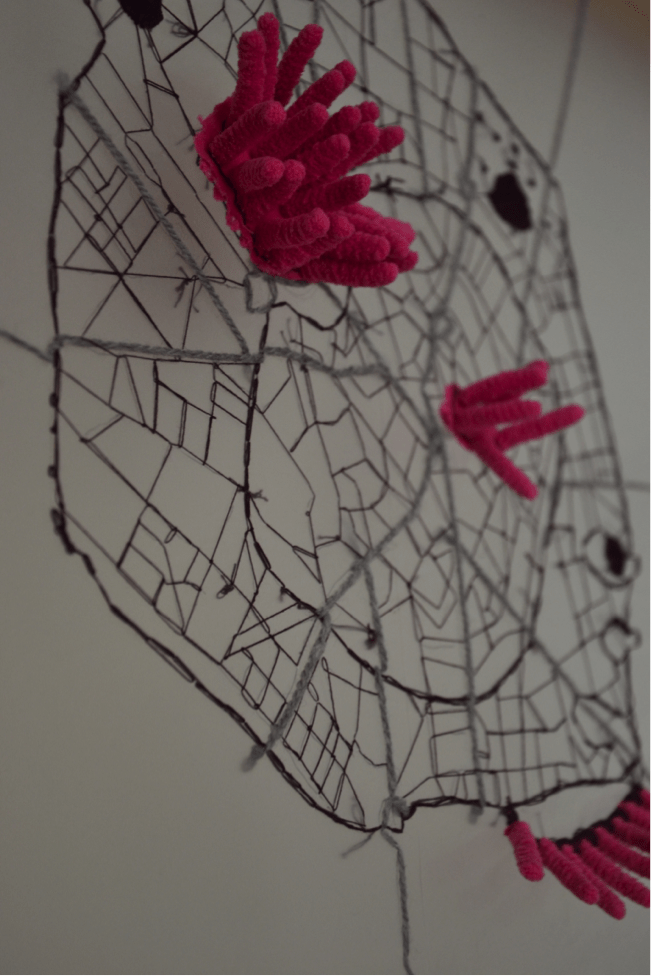 Wool and cotton on nylon, wood 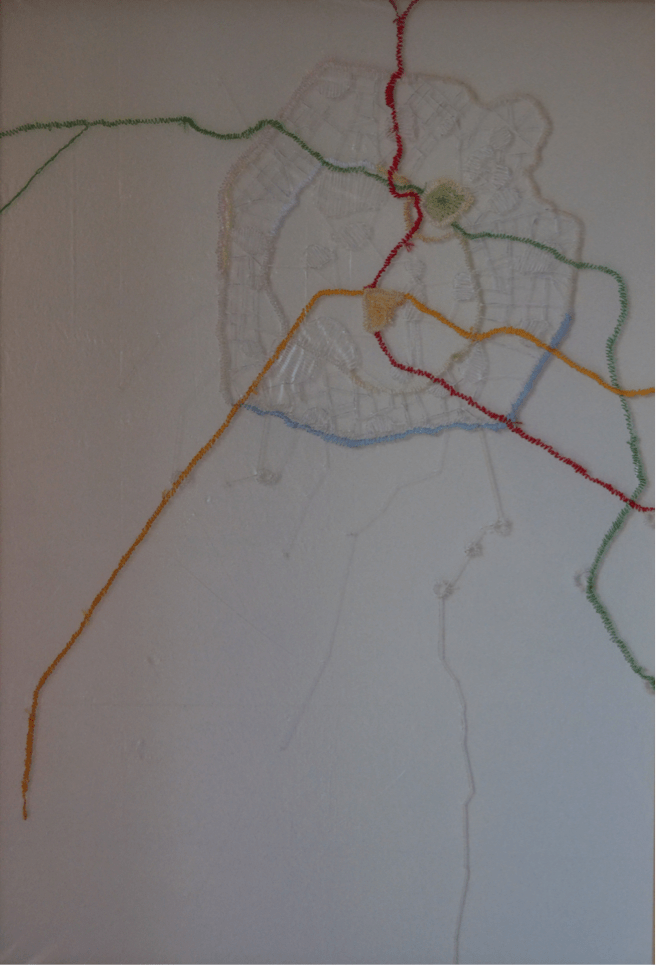 Wool and cotton on nylon, wood

In the series of “Urban Endoscopies”, formal analogies are found between city topographies and eukaryotic cells (having one or more nuclei): through an “observing from within” (from the Greek endo = inside; skopia = observation), it seems that cities function as complex cellular organisms. The view from above makes it possible to transform the urban fabric into an organic fabric. 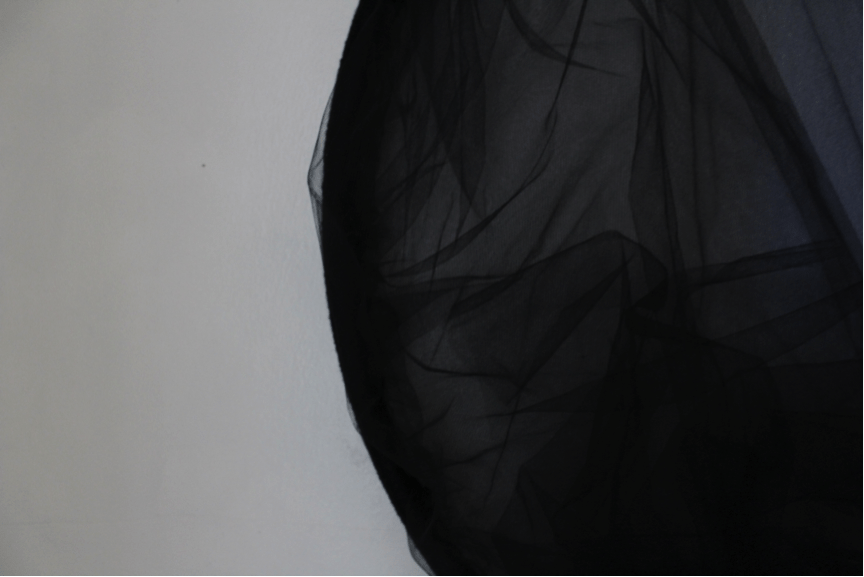 Envelope that holds, bag that contains, transparent and delicate membrane, thin belly that encloses the invisible, the non-palpable … nevertheless present. A movement of mind, a whirlwind of emotions, a song of the soul, a lyrical, intimate and profound state. Submerged. Visceral. A condition in which everything is transformed and tries to emerge, to take shape. 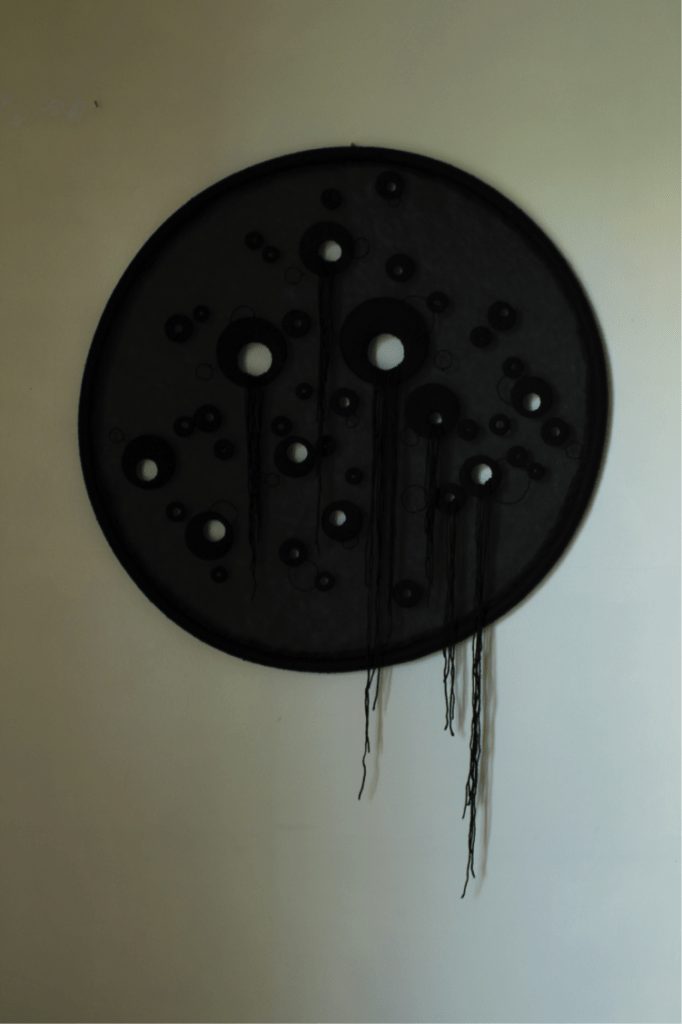 Literally translated into “pain points”, they are pain points in the muscle tissue that go to designate a real “pain map” in the human body.