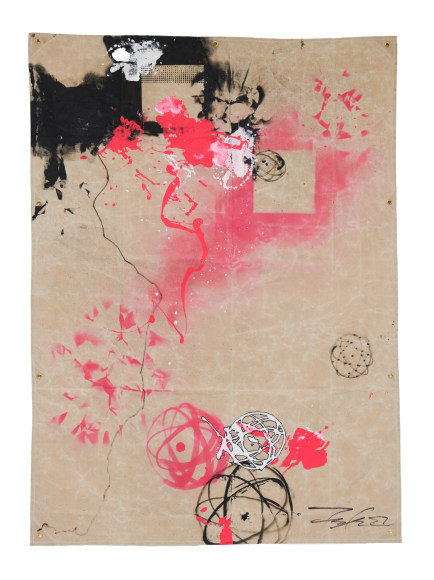 Eric Firestone Gallery is pleased to announce FUTURA2000 / TARPESTRIES. Opening on August 6, 2022, the exhibition unveils a fresh body of work that the artist made this year. 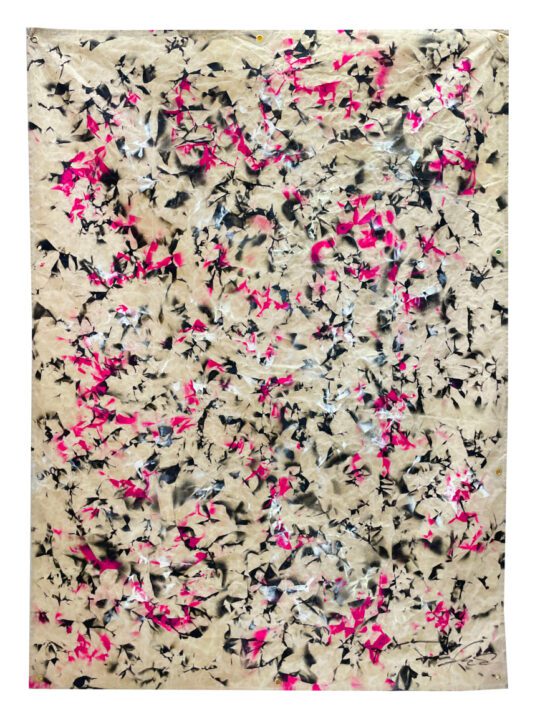 Presented across Eric Firestone Gallery’s locations in East Hampton will be more than twenty unstretched paintings that are highly expressive and richly layered. These compositions are filled with precisely rendered lines and symbols, saturated mists of color, and gestural brushstrokes. They will be juxtaposed with a monumental bronze sculpture of “39 Meg”: a quasi-alien, quasi-robot figure that FUTURA2000 has repeatedly depicted. 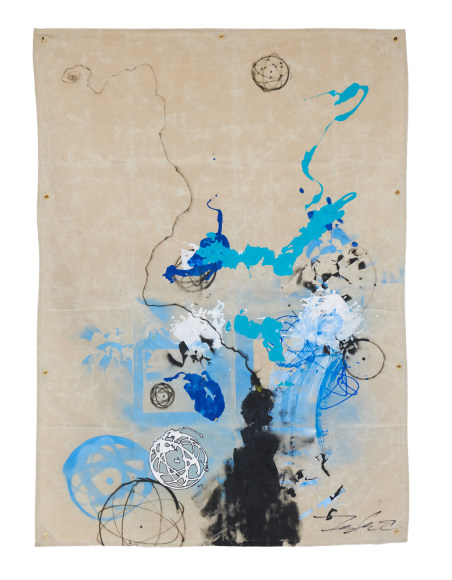 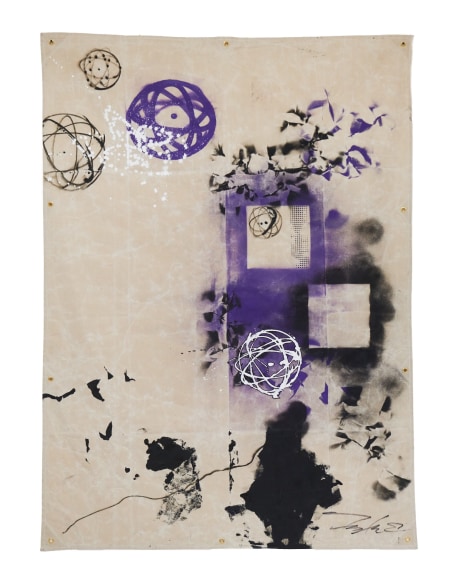 On view through September 18, 2022 in the gallery’s flagship building at 4 Newtown Lane as well as its recently opened warehouse space called The Garage at 62 Newtown Lane, this is FUTURA2000’s second solo exhibition with Eric Firestone Gallery, who represents the artist. It follows Futura Akari, a 2020–21 solo show at the Noguchi Museum, Queens, NY, as well as Writing the Future: Basquiat and the Hip Hop Generation, a 2020–21 survey including the artist at the Museum of Fine Arts, Boston, MA.

Among the most acclaimed graffiti artists who began his career painting subway cars in the late 1970s, FUTURA2000 is credited with introducing abstract painting to the street art genre—colliding the art historical tradition of Abstract Expressionism with the spontaneity and energy of urban art-making. As art historian and critic Carter Ratcliff writes, “[FUTURA2000’s] painterly gestures are the traces of powerful actions, yet his imagery feels more exuberant than gladiatorial. With a confidence he has always been able to count on, he turns the daunting blankness of the canvas into an occasion for an unexpected response.”

FUTURA2000’s most recent paintings return to his graffiti roots, with a progressive use of spray paint and a monumental scale not seen since his early days working in situ. Using Eric Firestone Gallery’s spaces in New York City and East Hampton as his studio, FUTURA2000 employed his trademark spray technique to create layers of paint on manipulated industrial tarps with grommets, producing a series of unstretched works.

Varying in scale from seven to twenty-five feet, these TARPESTRIES are exhibited unframed in the same manner as traditional tapestries. Visitors will be surrounded by and immersed in these monumental works. Speaking with The New York Times about his first exhibition in 2020 at Eric Firestone Gallery, FUTURA2000 remarked on the physical experience of his recent output:

“People are quite familiar with my stuff, but no one gets to actually see it, so I’m really happy people get to look at the work, without swiping, and zooming and enlarging with your two fingers. People’s perceptions immediately change. You’re actually in it.” 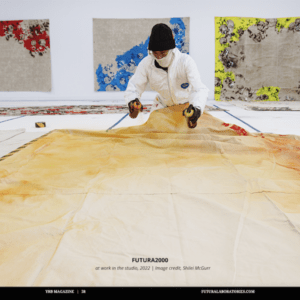 The artist’s practice bears his interest in a futuristic aesthetic. Long fascinated by science fiction and the space age, FUTURA2000 was an early adopter of sophisticated computer technology and video gaming. His compositional choices relate to these interests. By leaving areas of his canvases open—generating monochromatic energy fields and allowing forms to float across the surface—FUTURA2000 suggests access to a cosmic space. His recurring motifs include an atom shape, denoting perpetual motion; a crane or a linear mark, signifying a break or rupture; and the “Pointman.”

FUTURA2000 (Leonard Hilton McGurr, b. 1955, New York, NY) is an abstract painter whose practice first developed in New York during the 1970s. One of the earliest graffiti artists to introduce abstraction into his work, FUTURA2000 was also among the first of such practitioners to be shown in contemporary art galleries in the early 1980s.

FUTURA2000’s early exhibitions include presentations at Patti Astor’s Fun Gallery and Tony Shafrazi Gallery in New York City. His work was also featured in the historic 1980 Times Square show alongside that of Keith Haring, Jean-Michel Basquiat, Rammellzee, and Kenny Scharf. MoMA PS1 brought these artists together again in its landmark 1981 exhibition, New York / New Wave. FUTURA2000 collaborated with the punk band The Clash during this time as well, designing their album art and painting on large-scale canvases behind the band during its concert performances. In recent years, he created collaborative works with Takashi Murakami and exhibited at Kaikai KiKi Gallery in Tokyo. He worked with the late designer Virgil Abloh on collections for Off-White and Louis Vuitton as well as stage visuals at Coachella.

FUTURA2000’s work has been shown at the New Museum, New York, NY; Museum of Contemporary Art, Los Angeles, CA; Groninger Museum, Groningen, Netherlands; Yvon Lambert, Paris, France; and Galerie du jour agnès b., Paris, France, among others. In 2020–21, the Noguchi Museum, Queens, NY presented Futura Akari: an installation of Akari light sculptures customized by FUTURA2000. Also in 2020–21, FUTURA2000 mounted a site-specific installation at Palais de Tokyo, Paris, France; and he was included in the exhibition Writing the Future: Basquiat and the Hip Hop Generation at the Museum of Fine Arts, Boston. He was honored in 2022 by Free Arts, New York for his accomplishments in the arts and his mentorship of youths in underserved communities.